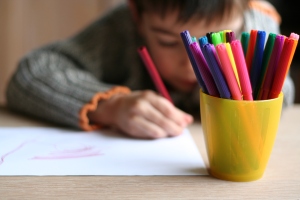 In the first part of this series, I looked at how to initiate early primary students in writing in English, and in Part II I focused on how writing activities can be built into the CLIL classroom. In this, the third part of the series, I’m going to look at ways to get students producing longer texts, either on their own or as part of a team. Here, the focus is inevitably on upper primary, although the ages at which the different activities can be used will vary widely depending on the programme of each school, and some of these activities may be more suited to early secondary in some schools.

One of the things which less proficient writers find daunting about producing longer texts is the very fact that they are being asked to write something longer than a couple of sentences. Faced with the blank page, they will often simply tell you they don’t know what to write. As teachers, our job is to support them in this stage, helping them to develop strategies which will allow them to develop longer texts. For this reason, it is very important that longer writing tasks be done in class rather than for homework – the students will need individual support as they begin their writing. Once they are writing confidently they can be asked to finish their work for homework if need be. I find the best way to scaffold longer texts is to break down the requirements into smaller, more manageable parts. In Part II we saw an example of this with the water cycle exercise, 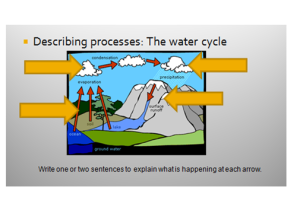 where the students were asked to write one or two sentences about each step in the process, rather than simply being asked to write a paragraph describing the water cycle. On the worksheet the different steps are visually separated, so that what they are producing does not have the appearance of a long text. Once the students have produced their texts on the worksheet, you can ask them to copy the corrected version into their notebooks in the form of a paragraph, so that they realise how much they have been able to write, but only after they have successfully completed the worksheet. This enhances the sense of achievement, and success breeds success.

Picture stories are another useful way of breaking down longer more complex texts into more manageable parts. I use the stories from the speaking part of the Movers and Flyers exams, and in this way the students have more practise with the type of story they will face in the exam at the end of the year. You can see an example of one of these stories here, taken from Gray (2000).

We can also get our students to make comic strips, producing their own pictures and adding text to each one. This can be done very simply by folding a piece of paper in half, in half again and in half again, which will divide the page into eight sections, for eight pictures. A more sophisticated alternative is to make a mini-book, instructions for which you can find here. This is a great way to check comprehension of something done in class, whether a story, or the steps in a process. I have used it to review extended reading, and to wind up work on biographies of famous people.

Another way to scaffold longer texts is to have students work together to create a text. This can be modelled using the ‘Mission Impossible!‘ activity, where each student has to create a correct sentence to form part of a story against the clock, with the teacher writing the story up on the board. Then put the students into groups of four and explain that each person will dictate one sentence of the text to the rest of the group. The other members of the group decide if they think the sentence is correct and appropriate or if it needs editing, and when they are all satisfied with the sentence they all write it down. Then the next person in the group dictates what they feel should be the next sentence in the text, and so on. This can be used to write picture stories, or any kind of text. It is very important that they have a clear idea of what they have to write about before they begin. I have used this to practise writing descriptions of places, projecting a photograph so that they are all describing the same place. This is also useful as practice for the Cambridge Preliminary (PET) speaking exam, where candidates are asked to speak for a minute about a photograph.

A slightly crazy version of collaborative writing can be a lot of fun for the end of term (although don’t expect great quality from the texts produced). Each student starts off with a piece of paper, and the teacher dictates the first sentence of a story, appropriate for the time of year or the topics being covered in class at that time. Each student then writes the next sentence in that story, and passes the paper to the student sitting next to him / her. each student then has to write the next sentence of the story they have in front of them before passing the paper on again. In this way you have as many stories circulating in the classroom as there are students, and each one will be different. As I have said, this is just a fun activity, but the students are still reading each text and writing, as well as revising what has been written before.

As I said at the beginning of this post, these activities may be suitable for primary students in some schools but more suitable for secondary students in other settings. The important thing is to get our students writing as early as possible, so that producing texts is seen as a normal part of the English (or CLIL) class. There are many other techniques we can use, and I hope that readers will share their own ideas through the comments section. One thing I have not touched on here is the use of technology in the writing class, and I hope to come back to that topic soon.