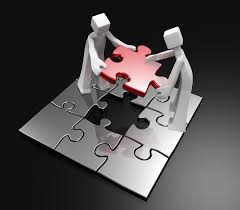 One of the things which I try to do in my conversation classes is to help students become aware of the structure of the texts they are interacting with at the same time as they develop their speaking skills. For this reason, I like to include dictation exercises from time to time, although I use variations which require the students to manipulate the text in some way themselves. In previous posts, I have examined Picture Dictations and other variations on dictations. In this post, I’m going to focus on what I have come to call ‘Jigsaw dictations’. The main idea behind a jigsaw dictation is that the students initially receive the sentences of the text jumbled up, and after the dictation they have to decide how to put the sentences together to recreate the original text. In doing this, the students not only have to transcribe the words that are dictated, but also apply their knowledge of grammar and text structure – what Halliday and Hasan (1976) called ‘texture’ – in order to produce a coherent text.

The initial text can be delivered to the students in a variety of ways. The teacher can dictate the sentences to the students in the traditional way, first making sure that the students write down what they hear as discrete sentences rather than as a paragraph. Alternatively, and this is the option I prefer, the list of sentences can be pinned up on the wall, and the students can do a running dictation in groups. In this way, the students take an active part in the dictation from the start. Another option is to give each student one of the sentences when they come into the classroom and they have to find partners who have the other sentences from the text before they dictate their sentence to the team they have formed (here it is important to tell them how many different sentences there are in the text, so they know how many people they need in their group). I used this variation to begin my talk ‘Making connections‘ at the II Arenas Teaching

Once the sentences have been dictated, the students should try to recreate the original text in pairs or groups. It is important that they get a chance to talk about their ideas, as in this way they activate their knowledge of the language as they explain the reasoning behind the order they are suggesting. The teacher should be going around the class monitoring the activity, but should not intervene at this stage unless absolutely necessary. The students need time to experiment with the language and try out different combinations.

Here is an example of a jigsaw dictation which I used with my B1 class this year, and also in my talk ‘Making connections’:

The correct version can be found in the powerpoint ‘Making connections‘. The title of the text is ‘Norwich’.