When I initially proposed the idea of having an ELT Research Blog Carnival to share what we as English language professionals had been learning through academic journal articles, I never really anticipated the response I would get. Deep down, I thought that this idea wouldn’t really catch on and it would die before it ever got started. I was pleasantly surprised, actually shocked would be more apt here, at the response I received from others. I thought I might be too optimistic to think that 2-3 people would join me in the first run, but instead there are a total of seven posts to share! I believe it shows how much ELT instructors care about learning and growing in their field. They are happy to question and reflect on what is happening in their classroom in order to help their students grow. I am proud…

Welcome to ELT Research Blog Carnival, the aim of which is to provide a space for ELT professionals to discuss research articles on a common theme. The first topic is ‘Listening’, and it is open until 23rd August.

In this post, Tyson Seburn explains how to make students more aware of the limitations of Google Translate, while at the same time giving us an idea of how to use the theme songs of popular TV series in class. Great fun for the new term.

I find that listening skills are the most difficult to teach. I usually end up just giving lots of practice, so my students develop strategies that work for them. In this article from www.busyteacher.com we are presented with five ways we can help our students develop effective listening strategies. While it is aimed specifically at hotel workers, I think the advice is useful for more general classes too.

This post is in response to Nathan Hall’s invitation to take part in an ELT Research Blog Carnival. The first topic is ‘listening’.

In a recent post, the Secret DOS asks, along with many other questions, if there is any more to language learning than memorisation, regurgitation and evaluation. I’d say there is. What that more is, though, may depend on who’s doing the learning and on what and why they want to learn. An essential element, however, must be that learners develop an understanding of how the language is used in different contexts and for different purposes by reading and listening to what and how things are written or said in that language.

But how do we cover all the many possible contexts learners will want to participate in? There isn’t enough time. There are too many learners. Their motivations, interests and goals are too diverse. Well, we…

This week I am working on dictations with my different groups, and I thought I would share a couple of ways I have found to make them a bit more interesting, both for the students and for myself.

With my more advanced groups, I am using a dictogloss, rather than a traditional dictation. The teacher divides the group in half, and sets one half some work to do outside the classroom. This week I had them preparing a presentation on a famous person. Meanwhile, the teacher does the dictogloss with the other half of the group. This exercise consists in reading a text to the students three times at normal reading speed. During the first two readings, the students listen, and after each reading they are given time to write what they remember. During the third reading they are allowed to write, so that they can check and complete their texts. After this they should be given some time in pairs or groups of three to check their work with each other. This usually leads to some interesting discussions on grammar and structure as they access what they know in order to reconstruct the text.

The other half of the group is then brought back into the class, and each one is paired with someone who has done the dictogloss. These then dictate the text they received as a dictogloss to their partners (this is done as a normal dictation rather than as a dictogloss). Finally, the teacher collects the resulting dictation, and then projects the original text so that they can check their own answers.

In this video, you will see Dave Spencer from Macmillan doing a dictogloss exercise with a group of students.

With my less-advanced students, I am doing a variation of a running dictation. Before the class, I copy a text of a level which the students will find relatively easy, but I place the sentences in a different order. The disorganized text is pinned on the wall. The class is divided into teams of three or four. One member of each team goes to the text and memorises the first part before going back to his / her team and dictating it to them. The second member of the team then goes to the text and memorises the next part and so on. While the second member of the team is at the text, the first member of the team writes down what s/he has just dictated, so that everyone in the team has a complete text.

Once the team has dictated the whole text, they must decide the correct order for the sentences, writing a clean copy of the text. This can be treated as a race, or each team can simply read out their version of the completed text at the end of the class before the teacher projects the original text for them to check their work.

Here is a video with other ideas for organising a running dictation.

For an extension activity for running dictations, particularly for younger students, click here.

Here is a very interesting article from the British Council, explaining ways to introduce British regional accents into the English classroom.

Here’s a post on how to start recording your own podcasts. http://instructionaltechtalk.com/how-to-podcast-for-free/ 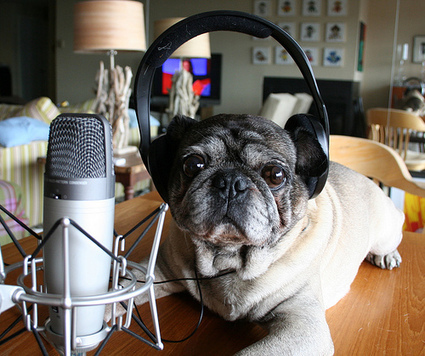 When my high-level students tell me they want to improve their listening skills, I always tell them to listen to PODCASTS! Podcasts are a fantastic way to improve your understanding of spoken English.

For high-level students it is vital that they have access to authentic English texts, both written and spoken, so this is great for them.