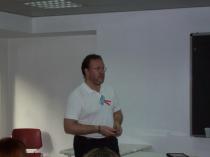 In this workshop, my aim was to demonstrate a series of activities which can be used in class as a way of encouraging our students, particularly teenagers, to develop their speaking skills.

I use this activity at the beginning of the year, when I want to get to know something about my students, and when they want to get to know me a little. At the start of the class I write five numbers on the board, and explain to the students that each number is linked to something significant in my life. The students have to ask questions to find out what each number represents, to which I can only answer yes / no. When they have guessed my numbers, each student gives the class a number which represents something important for them.

This activity is taken from Mario Rinvolucri’s book, Grammar Games. A situation is described to the students, and they have to fill in the details of the story which led to that situation, by asking questions, to which the teacher can only answer yes or no. To help, they are given five clues – GARDEN, LOVER, 30 YEARS, JAIL, VANISH.

A man gets onto a train. He sits in a compartment which is empty except for one woman. The woman takes off her gloves. Two hours later, the man is arrested. The police hold him for 24 hours, and then, logically, are forced to let him go free.

The man and the woman were married, but the woman had a lover, and she decided to run away with him. To ensure that her husband could not follow her, before they left the lover cut off two of her fingers and buried them in the garden. When the husband called the police, they found the fingers and the man was convicted for her murder, serving thirty years in jail. When he got out of jail, he took a train. When the woman in his compartment took off her gloves, he realized that this was his wife, and killed her. However, since he had already served a prison sentence for killing her, the police could not prosecute him again for the same crime, so they had to let him go.

WOULD I LIE TO YOU?

This activity encourages the students to form open questions, focusing on the use of interrogative pronouns and past tense questions. The teacher writes three sentences on the board and explains that they are related to your life, but two of the statements are true and one is false. The students ask questions to try to discover which of the statements is not true. The teacher is allowed to invent things to defend the untrue statement as if it were true. Once the students have guessed which statement is false, they play the game again in groups, using their own statements.

This game comes from BBC Radio 4. The objective is to speak about a given topic for one minute without hesitation, deviation or repetition. Other students can challenge the speaker if one of these occurs, and if the challenge is correct the challenger wins a point, and continues with the topic for the rest of the minute. For lower level classes, the challenges can be based on grammar or vocabulary mistakes.

In this activity, the students are given a topic to talk about, and time to prepare. They can make notes, but not write out their answers. Then they are put into pairs and each student has two minutes to talk about the topic, while their partner listens and if necessary supports with questions. Optionally, each student can be asked to report to the class on what their partner has told them.

One way of motivating students is to include an element of competition or time pressure into the activity. In this activity, the students are asked to construct a story against the clock. The first student is handed an egg timer (preferably with a loud tick), which represents a bomb, and asked to dictate the first sentence of a story to the teacher, who writes it on the board. Each student in turn dictates a sentence of the story, but they can only dictate when they are holding the ‘bomb’, and they can only pass on the bomb when the sentence is accepted as correct. The student speaking when the time runs out is eliminated.

This is a great way to finish a term, based on a BBC Radio 4 programme which has been running for over seventy years. Before the final lesson of the term, ask the students to think of a song / piece of music which is special to them in some way, and prepare an oral presentation giving their reasons. In the final lesson, the students take turns to present their music choice, speaking for two or three minutes (depending on the level of the class). Once they have given their presentation, the class listen to the music they have chosen.

12 thoughts on “Getting Them Speaking – Activities for the conversation class”